There is no denying the traffic congestion in the Crabtree Valley Mall, area and without necessary changes, the congestion and hazards will continue to get worse.

A proposed NCDOT construction project is slated to be the answer to this problem, but it could or be problematic for area landowners.

The Interstate 440/Glenwood Avenue Exchange in the Crabtree area of North Raleigh is one of the most dangerous areas in Wake County, in terms of the number of traffic collisions. At a recent NCDOT forum, a number of area residents shared stories of car wrecks and near-misses. A planned $300 million renovation, which includes a 30-story mixed-use retail tower, could make traffic congestion worse. 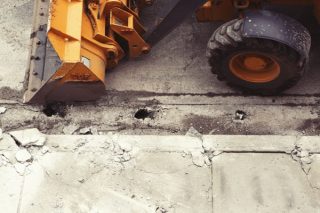 NCDOT is currently considering several designs for renovations to the I-440/Glenwood Avenue interchange, as well as the Glenwood Avenue and Lead Mine/ Blue Ridge intersection. All of these proposals would significantly rework this area for both motorists and pedestrians. Because of this project’s ambitious nature, construction is not scheduled to begin until 2025. NCDOT has earmarked $230 million for land acquisition and construction costs.

Project planning began in 2011, just as Wake County’s population boom began. The I-440/Glenwood overhaul has been controversial from the beginning, mostly because of increased flood risk. The area is already prone to flash floods during heavy rains. If the new construction triggers the dreaded “flood plain” level, area land values could plummet.

What are the Expected Changes to Glenwood Avenue?

Additionally, in 2018, NCDOT engineers significantly revised the project to include auxiliary lanes and other changes. Some business-owners feared a loss of frontage road access, and some homeowners feared additional freeway noise.

This area is one of the most highly-developed parts of North Raleigh. As a result, a freeway project of this magnitude would be incredibly disruptive, especially for business-owners.

Redesignation as a flood zone could significantly raise operating expenses, due to rising insurance costs. In many cases, these increases could force some businesses to shut their doors or relocate.

Additionally, many businesses in the affected area are hotels and other hospitality enterprises which depend heavily on vehicle traffic. Redirecting this traffic could significantly affect profit margins in an area where competition is fierce.

Your Legal Options When the State Sends an Eminent Domain Request

Once NCDOT green-lights the I-440/Glenwood renovations and begins buying property, there is no way to stop the project or the purchases. However, landowners have a significant voice in the pricing process.

Under federal and state law, NCDOT cannot purchase property for the current fair market value. Instead, the agency must pay the fair market value of the land’s highest and best use. The difference could be significant.

Landowners who lose property to make way for the new freeway are not the only ones affected, especially when the project is so large. Nearby landowners might see their property values drop due to increased flood danger, more noise, or another factor. NCDOT must compensate owners for these indirect losses as well.

Evidence is often key in these proceedings. So, our Raleigh land condemnation lawyers often partner with accountants and other professionals to present tangible and credible proof of future value and profit losses.

Property owners have a strong voice in the condemnation process. For a free consultation with an experienced Raleigh land condemnation attorney, contact Kirk, Kirk, Howell, Cutler & Thomas. We routinely handle matters in Wake County and nearby jurisdictions.