What is Eminent Domain?

In the United States, local governments use Eminent Domain

and land condemnation to acquire property for public use. The Fifth Amendment of the U.S. Constitution allows the government to take private property for “public use” so long as landowners are fairly compensated.

Eminent domain laws vary from state to state and city to city because land condemnation is a civil process unique to each jurisdiction. Knowing your rights beforehand can help you understand how eminent domain impacts you. You’ll understand the steps you can take in response if your land is threatened by an eminent domain declaration or if you feel you haven’t received a fair compensation.

What Is Eminent Domain?

The term “eminent domain” is used to describe the government’s legal right to seize privately owned land and put it to public use. According to the Fifth Amendment, the government cannot seize private property without compensating the owners adequately.

In short, eminent domain is the government’s right to acquire land for public use. Any governmental entity (federal, state, county, or city) has the power of eminent domain, but usually only for urban renewal like a new road or railway.

The government cannot just take your land and do what they want with it. They must have a legitimate reason for doing so, and they have to compensate you for it.

How is Eminent Domain different than Land Condemnation?

Although related, it’s important to note the difference between the two. We discussed that eminent domain laws are meant to provide compensation to landowners. But in the case of land condemnation, no compensation is given.

What is the Purpose of Eminent Domain?

The Fifth Amendment of the U.S. Constitution allows for this practice so long as landowners are fairly compensated for giving up their property rights.

The U.S. Supreme Court described eminent domain in a 1905 case as “a function both legitimate and necessary.” Though it may sound ominous, eminent domain is actually a critical part of the nation’s infrastructure.

How Does Eminent Domain Work in North Carolina?

Specifically, the North Carolina General Statute §160A-343 states that all governing bodies (local governments) must follow the North Carolina Eminent Domain Code. Here is the process of eminent domain, including the following steps:

When Can a Government Use Eminent Domain?

A United States government, either federal, state, or local, can use eminent domain when acquiring land for public projects that are necessary or for economic development. This means the government must show that their project is necessary and that it benefits the public.

The government must also show that taking the land is a “last resort” after other efforts to acquire the land have failed. If the government initiates eminent domain for highway construction, for example, a road expansion or a new bridge may qualify as “public purposes.”

However, if local officials plan to build something deemed unnecessary, then there could be opposition.

Types of Property That Can Be Condemned

Though governmental authority can condemn any type of land, they generally focus on personal property such as residential, commercial, and industrial property. These properties are easier to acquire. Partial taking of such property is a little more complicated as there is a lesser chance for just compensation.

Most government entities don’t have the resources to purchase large tracts of undeveloped land. If the government agency condemns your entire property for a public project, you can expect to receive a letter informing you of the action. This letter is typically known as a “condemnation notice.”

Limitations on the Use of Eminent Domain in North Carolina 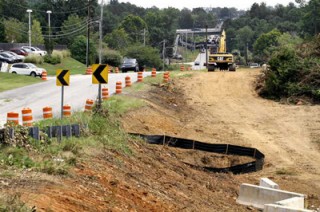 There are two important eminent domain cases that deal with public use. The first is the case of Kellet v. City of Raleigh. In this case, Raleigh wanted to build an airport on land that Kellet owned. The city claimed that the airport’s purpose was for public use because it would provide jobs for the community. The court disagreed, ruling that the airport was meant to benefit private airlines. The second case deals with the need to show there is no feasible alternative.

This was the case of the City of New London v. Sousa. The city wanted to build a large development on waterfront property. The owner of that property refused to sell his property to the city, so the city used eminent domain. The court ruled that the city did not have a feasible alternative for building the development. They also did not prove that building the development in a different location would not have generated the same economic benefits.

This can be more or less than what you paid for it. If it’s less than you paid, you can even refuse the offer.

If the land is not being used as a home, then the government must pay the fair market value of the land. This can be anywhere from $2 to $50 an acre or more. In many cases, the government will also have to pay for any improvements that have been made to the land.

How to Respond If You Receive an Eminent Domain Letter

If you receive a condemnation letter, the government has already initiated the eminent domain process. You can respond to the government in one of three ways: You can negotiate a higher price, you can contest the action, or you can abandon your property.

If you receive a letter offering you fair market value for your land, you can negotiate a higher price. Remember, you are in the best position to determine the value of your land. City officials have a vested interest in acquiring your land, so they may offer you a relatively low price.

If you’re served with an eminent domain action, you should consult a lawyer and review your offer from the government.

If the government plans to acquire your land, it will usually initiate the process by sending you a letter offering you a “conditional sale” of your property. Once you sign the agreement, the government will send you a “notice of intent to acquire.”

The government then obtains a “final condemnation order” from a court judge. This order authorizes the government to acquire your land through eminent domain.

You may receive a “notice of appraisal” or “notice of intent to appraise” at some point during the process. This is a letter informing you that the government plans to hire an appraiser to determine the value of your land.

You may also receive a letter requesting that you sign a “consent to appraisal.” This letter is essentially a waiver allowing the government to appraise the value of your land. If the appraisal turns out to be less than what you initially received in the conditional sale, you can still negotiate a higher value.

Eminent domain laws provide a fair and transparent process for governments to take private property. Everyone understands that government’s need to build roads and railways, but they must compensate landowners for the value of the property.

Eminent domain laws are a two-way street: The government gets to build something that benefits the public, and the public gets to use a new road or railway.

If you receive a letter from the government showing they plan to take your land, contact a lawyer. Your government’s land acquisition process can take years to complete. You can often navigate the process more easily if you know your rights.

You need an NC land condemnation attorney when faced with the dilemma of the government wanting your property.

Kirk, Kirk, Howell, Cutler and Thomas are your NC land condemnation attorneys when faced with an eminent domain case. For over 40 years, we have represented land condemnation cases all over North Carolina. Call us at 919-615-2473 or Contact us today for your free consultation.

What Are Your Rights in an Eminent Domain Claim?