What is Trespassing in North Carolina? 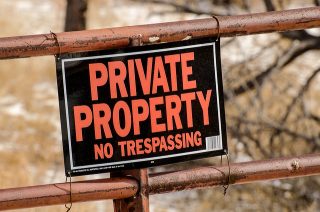 Trespassing in North Carolina can be defined as simply entering the private property of a landowner or a legally permissible occupant, without their permission or by violating clearly posted signage stating no trespassing. Several factors can escalate a simple misdemeanor trespass charge to a felony.

A person can be charged and found guilty of trespass if they enter a location or remain in said premises that clearly demonstrates the intent to keep out intruders.

For example, a clearly displayed POSTED or No Trespassing sign, on private property is sufficient notification to provide potential intruders. Those found violating can be charged with trespass.

First degree trespassing is charged as a Class 2 misdemeanor

To prove guilt of first degree trespass, the prosecution must prove that the defendant entered or remained on the property of another person without their permission. Additionally, the intruder entered an enclosure that was secured with the intent to keep intruders out.

Punishable up to 150 days in jail and a fine that can be determined by a judge.

To become an A1 charge, the trespassor must have:

A Class H felony includes a sentence up to 39 months in prison.

To escalate to a Class H felony, the intruder must:

A Class 1 misdemeanor with up to 120 days in jail and a fine determined by the judge.

Defined by NC General Statute 14-134.3, domestic trespass involves married, separated, divorced or even former partners that lived together. After being informed not to enter or remain on the premises by a “victim,” the intruder still commits the trespass. There must be evidence to prove the parties have been living apart. Documentation of the separation is crucial to back up your claim as the victim.

A former partner or spouse can be charged with domestic trespass if the violate:

The goal of this trespassing charge is to forbid an ex spouse or partner from leaving a shared home with the intent to move out, and then returning without permission.

A class G felony with up to 47 months in prison can be charged to the violator if the victim is living in a safe house for domestic violence victims. If the victim is not living in a shelter, but the trespasser commits the crime while armed with a deadly weapon, the charge will be escalated to the felony charge.

Entering a property without lawful permission of entry and willfully refusing to leave the premises after being ordered to do so.

Additionally, forcible trespass can be charged if the defendant used force against the occupant or threatened to use force, with the goal of creating fear in the occupant.

Most North Carolinians are unaware of the subtly in the laws regarding breaking and entering. Even the smallest act could constitute a criminal charge. Simply placing a key into a lock or crossing over a door threshold and not entering any further can STILL be grounds for arrest. Intent plays a factor, but often the facts do not come to the surface until after you’ve been arrested and charged.

Breaking and Entering as a Felony can fall under several categories:

The differing factors that determine the severity of the criminal charge is intent. A misdemeanor trespassing charge is due to the offender committing the entry did not do so with the intent to commit a felony or larceny. B&E charges are commonly covered under burglary

A misdemeanor is punishable with up to 120 days in jail. Prior Offenses offenses can escalate a misdemeanor B&E charge to a felony resulting in a longer term prison sentence.

N.C.G.S 14-7.3 states that habitual breaking and entering is punished as Class E felony punishable up to 88 months in prison.

Here are some common options for trespassing convictions:

Q. What happens if I have been asked to leave the premises from the landowner, and I cooperate?

Q. Can Police Be Charged with Trespassing?

Q. Can You Get Arrested for Trespassing ?

Yes, if you do not have permission or you are violating a trespassing order.

Q. Can You Shoot Someone Trespassing on Your Property in North Carolina?

Under NC law, a homeowner is afforded the ability to use reasonable force for someone criminally entering their home or domicile if you reasonable believe your life to be in danger.

If you have requested a person to leave, you as the landowner can use, NO more force than is reasonably necessary” for the removal of the violator.

Simply shooting someone for being on your property is illegal. Contact the police if you have requested someone to leave and they have not done so.

Q. Do I Need a Lawyer for Misdemeanor Trespassing?

You are allowed to represent yourself, however it is not advisable. The legal system can be very complicated and seemingly insignificant details can turn the case from a simple Class 2 misdemeanor to a full felony. It is important to have experienced legal counsel with any criminal case.

Q. Does Trespassing Mean No Soliciting?

Not exactly. Having a no trespassing sign or no soliciting sign is simply a deterrent, meant to provide the private landowner the ability to request a violator to leave. This signage does not mean a person will not still enter your property and attempt to sell to you. If they fail to leave upon your request, then you may contact the police to issue a trespassing charge.

Q. Does Trespassing Stay on Your Record?

A warning will not be placed on your permanent record, but a conviction will be unless a request for expungment is approved by the NC court system.

Many times a person guilty trespassing did so unknowingly and had no intention of violating the law. Other times, a person is knowingly committing the crime with the intent to steal or harm. Regardless of the reason for your trespassing charge, it is essential have a Raleigh criminal defense lawyer for your case.

By working with an attorney, you may be able to receive a reduced sentence or have the case dismissed. Our team is available for consultation by calling 919-615-2473 or by completing the form below.