Crimes in North Carolina are generally divided up into two groups: crimes 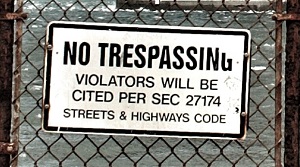 against a person, such as assault, and crimes against property, such as arson or trespassing. A wide variety of charges fall under property crimes, making it a highly complicated area of criminal law encompassing everything from minor misdemeanors to more serious felonies. Penalties related to property crimes range from small fines or community service to long-term prison sentences. To get a clear understanding of the different types of property crimes, and how they are classified in North Carolina, our experienced Raleigh criminal attorneys at Kirk, Kirk, Howell, Cutler, Thomas, LLP have created an overview of the most common crimes against property.

Second-degree trespass is a more serious offense that occurs when someone enters the land or building and refuses to leave after the owner or legal resident has specifically expressed that the person is not welcome on the property. This is a Class 3 felony.

It’s important to note that domestic criminal trespass does not fall underN.C.G.S. 14-159.12 as it falls under domestic violence laws.

Vandalism in North Carolina refers to defacing, damaging, or destroying property or land. In North Carolina, there are three specific statutes related to vandalism:

Most crimes related to theft are referred to as larceny in Article 16 of the North Carolina General Statutes and is generally referring to intentionally taking someone else’s property. Once separated between petit and grand larceny, those distinctions have been removed, though larceny of goods valued over $1,000 is typically a Class H felony while lesser values are charged as misdemeanors in most cases.

Forms of larceny include receiving stolen goods, shoplifting, and larceny by employees.

Learn about the specific types of larceny and theft charges in North Carolina.

Burglary is often confused with robbery, and while both crimes involve taking property from another person without their consent, burglary does not involve theft accompanied by force against an individual.

Breaking and entering is a Class 1 misdemeanor according to N.C.G.S. 14-54. That’s assuming that the person has wrongfully entered any building, not including a house of worship, without the intent to commit a crime. If the intent upon entering is to scare or injure an occupant or commit theft, the charge becomes a Class H felony.

While it’s considered a property crime, arson in North Carolina is almost always considered a felony and carries very harsh penalties because of the potential for extensive damage, injury, and death. N.C.G.S. 14-58 separates arson into two degrees. In first degree arson, the home or dwelling that is set on fire is occupied and is a Class D felony, while in charges of second-degree arson, the residence is unoccupied, thus is classified as a Class G felony. Additionally, North Carolina has separate arson laws related to burning schools (14-60) and burning churches (14-62.2).

Whether you are charged with a misdemeanor or felony property crime, a conviction can negatively affect you long after you have completed your sentence. Having a record of property crimes can prevent you from getting hired at jobs or even affect your ability to rent a house or apartment. In order to get the best outcome to your case, you need a Raleigh criminal lawyer on your side.

At Kirk, Kirk, Howell, Cutler, & Thomas, LLP, we provide expert representation to those charged with property crimes including theft, vandalism, arson, and burglary. Contact us at (919) 615-2473 or fill out our contact form to speak with an attorney today.