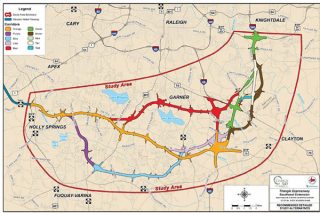 UPDATE:  The NC DOT has confirmed the “Orange Route” as the approved path to complete the I-540 project. Visit our resource: “THE ORANGE ROUTE IS APPROVED FOR WAKE COUNTY’S I-540 “SOUTHERN LOOP” for more information.

Could the long-awaited decision regarding the route for the Southeast Extension of Highway 540 from Holly Springs to Knightdale finally be in the offing? The answer is a resounding “Not just yet”, but it does appear we are getting closer. If you are keeping score, based upon the information we recently obtained, the Orange route appears to be in the lead.

What Routes Will the NCDOT Choose for 540?

By way of background, several routes are under consideration by the North Carolina Department of Transportation (NCDOT). Those can be seen here. The routes are referred to as the Orange, Purple, Blue, Lilac, and Red Corridors. NCDOT continues to study them all in-depth, with a final decision supposedly being announced in the fall of 2015.

Along the way, public and political comment have entered the mix and at one point the Red Route was even pulled when the North Carolina General Assembly, bowing to political pressure, passed a bill declaring it should not be considered.

Thereafter the Federal government threatened to pull federal funding for the road project unless the Red Corridor was at least put back on the table for consideration. The General Assembly reversed itself and the Red Route was placed back in consideration. However, it is not much of a stretch to believe the Red Route is now being “considered” about like I am “considering” playing in the NBA.

On the other hand, the Orange Route appears to be gaining significant support.

In October 2013, NCDOT presented the various routes to the Capital Area Metropolitan Planning Organization (CAMPO), a board that includes representatives from local governments within the study area. CAMPO subsequently expressed support for the Orange Route. Several public meetings have been held that were attended by approximately 1700 people, about 1100 of which submitted comments. NCDOT indicates that the majority of THOSE people favored the Orange Route.

NCDOT has specifically indicated that it will “include all of the comments in any final decision-making process”. If you are into reading tea leaves, it would at least appear there is a clear front-runner at this point, and the tea is Orange.

Are You Affected by the Proposed 540 Project?

We have continued to keep our ear to the ground for the benefit of any landowners who feel they might be affected by the I-540 projects. Visit our completion of I-540 page to learn more about the project’s impact on Apex, Cary, Garner, Clayton, Fuquay-Varina, Holly Springs, and Raleigh.

In the meantime, if you have questions about the NCDOT’s process for road project such as this one, feel free to contact our eminent domain lawyers by calling 919-615-2473 or by filling out the form below.